“It smelled like Afro Sheen and chicken,” says Musa Jackson of The Harlem Culture Festival, a weekly series of six concerts put on in Harlem’s Mt. Morris Park during the summer of 1969. Jackson attended when he was a kid, earning his first romantic crush in the process. I laughed at his amazing description, mentally deeming it almost too Black to be uttered in polite company. But in the spectacular, Sundance award-winning documentary, “Summer of Soul,” polite company is nowhere to be found. Instead, Black folks are amongst our own, so the guard is down, the joy is infectious and the chatter is barbershop-level unfiltered. To paraphrase Jackson, this film is “like a Black barbecue.” Working the grill, and not letting anyone else touch it, is musician and music lover, Ahmir “Questlove” Thompson making his directorial debut. Not only does he give us a concert film, we get a history lesson, too.

The concert footage is courtesy of Hal Tulchin, a television director who documented all six concerts in the hopes of putting it out for public consumption. Despite the Harlem Culture Festival having a major backer in Maxwell House coffee, and an incredible array of Black and brown talent, only two hours of footage saw the light of day on WNEW Channel 5 in New York City. There was just no interest in a concert that was “too Black,” especially during the summer of that much hyped music festival 100 miles north of Harlem. They made a movie out of that one a year later. Meanwhile, 40 hours of this film’s subject faded into obscurity.

Thankfully, Tulchin kept all 47 of the reels he shot in his basement. Almost 50 years later, it was retrieved, cleaned up, and edited to serve as the backbone of “Summer of Soul.” The clips are chosen carefully, not just for the familiarity of the performers but also as context for the backstory Thompson wants to tell. He sets the stage both musically and historically, beginning with the main purpose for the Harlem Culture Festival. Through news and interview footage, we’re reminded of the assassinations of both Kennedys, Malcolm X, and Dr. Martin Luther King, Jr., the last of which set off riots in Newark, Detroit, Atlanta, and Watts in 1968. The next year, to commemorate the anniversary of Dr. King’s death, the Harlem Culture Festival was created.

This explanation made me think of the 1973 concert film, “Wattstax.” In the opening scene, Richard Pryor calls the concert a commemoration of the Watts Uprising. “For over six hours the audience heard, felt, sang, danced and shouted the living word in a soulful expression of the Black Experience,” he tells us. That notion is in such perfect sync with “Summer of Soul”’s tone, timbre, and beats that a double feature should be mandatory viewing. Ironically, “Wattstax” was dubbed “the Black Woodstock” simply because nobody outside of New York had heard of the Harlem Culture Festival. Both films share the Staple Singers and a very young Rev. Jesse Jackson, and contain interviews with people who lived in the neighborhood at the time. Even though Thompson interviewed his subjects in a contemporary timeframe, so little has changed in the struggle that they may as well have been talking to him in 1969.

Our onscreen emcee is Tony Lawrence, a lounge singer and radio DJ with a smooth voice and even smoother threads. The montage of his outfits is a high point, as are the introductions he delivers with two parts morning show brio and one part “quiet storm” smoothness. He refers to then-mayor of New York City, John Lindsay, as “our blue-eyed soul brother,” giving the film time to inform us just how popular Lindsay was with Black and brown voters. One talking head points out just how comfortable Lindsay was around his non-White constituents, and a clip shows him walking in Harlem during the anniversary of MLK’s death. Lindsay does draw the line when Lawrence asks him to sing, because he knew just how outranked he was by the talent.

And what talent there is here! It’s not enough for us to see performances; Thompson gives us scenes where the artists are filmed watching themselves and commenting. Gladys Knight appears to talk about her experience, as does Stevie Wonder; the latter’s performance includes a mean, jaw-dropping drum solo. Mavis Staples is heard in voiceover describing how moved she was to perform with gospel legend Mahalia Jackson (their duet is enough to make an atheist reconsider). Staples also recalls when she realized her father, guitarist Roebuck “Pops” Staples was writing songs with God’s lyrics atop the Devil’s music. As a surprise, Lin-Manuel Miranda appears to discuss the Afro-Latino performers who also took the stage, and we get a geography lesson about Spanish Harlem.

The most moving appearance by artists has to be Marilyn McCoo and Billy Davis, Jr., members of The Fifth Dimension. At the time of this festival, the group had a hit with “Aquarius/Let the Sun Shine In,” from the musical Hair. Davis reveals how they came to record that song through sheer luck and a lost wallet, and McCoo stresses how important it was to perform for this Black audience because some thought The Fifth Dimension sounded too White. (Full disclosure: As a kid, I thought they were White, too.) Watching McCoo and Davis’ eyes well with tears as footage of their performance renders them speechless is a touching testament to how important these concerts were.

It’s also bittersweet to see performers who are no longer with us, and to long to hear what they might have said to us. At the top of that list is Nina Simone, whose incredible performance of another Hair staple “Ain’t Got No/I Got Life” was bypassed in favor of different though no less compelling clips. Simone is breathtakingly regal, from her geometric hairdo and earrings to her outfit and shoes. Her energy flies off every corner of the screen in waves that hit you just as hard as she bangs on that piano. One can only imagine how it must have felt live; I envied everyone who spoke onscreen of being there. And everyone—performers, crew members, attendees—says the same thing: “I’ve never seen so many Black people in one place in my life.” Every time they said it, I started to cry.

A screener mishap almost prevented me from filing this review. Perhaps it was the ancestors, or some trickster from African folklore who zapped it, because as luck would have it, “Summer of Soul” has been playing at one theater in New York City. In Harlem, to be exact, a stone’s throw from where the Harlem Culture Festival took place. So, my in-person attendance was pre-ordained. The theater played the film as loudly as possible, and nobody on 124th Street and Frederick Douglass Blvd. was going to fault me for dancing in my chair or clapping along. I had kindred spirits in my audience.

Afterwards, I walked down to what is now Marcus Garvey Park and I stood inside, looking around and picturing the energy, the camaraderie and, oh yes, the Blackness that emanated from those concerts. It was hot as Hell outside, but I felt simultaneously exhilarated and haunted, as if some energetic remnant of the Harlem Culture Festival were still hanging in the air, passing through me and touching my soul. That’s what it feels like to watch “Summer of Soul.” Its existence is a testament to Hal Tulchin, to whom the film is dedicated, and to Questlove, who has pulled it all together with immense love and undeniable talent. 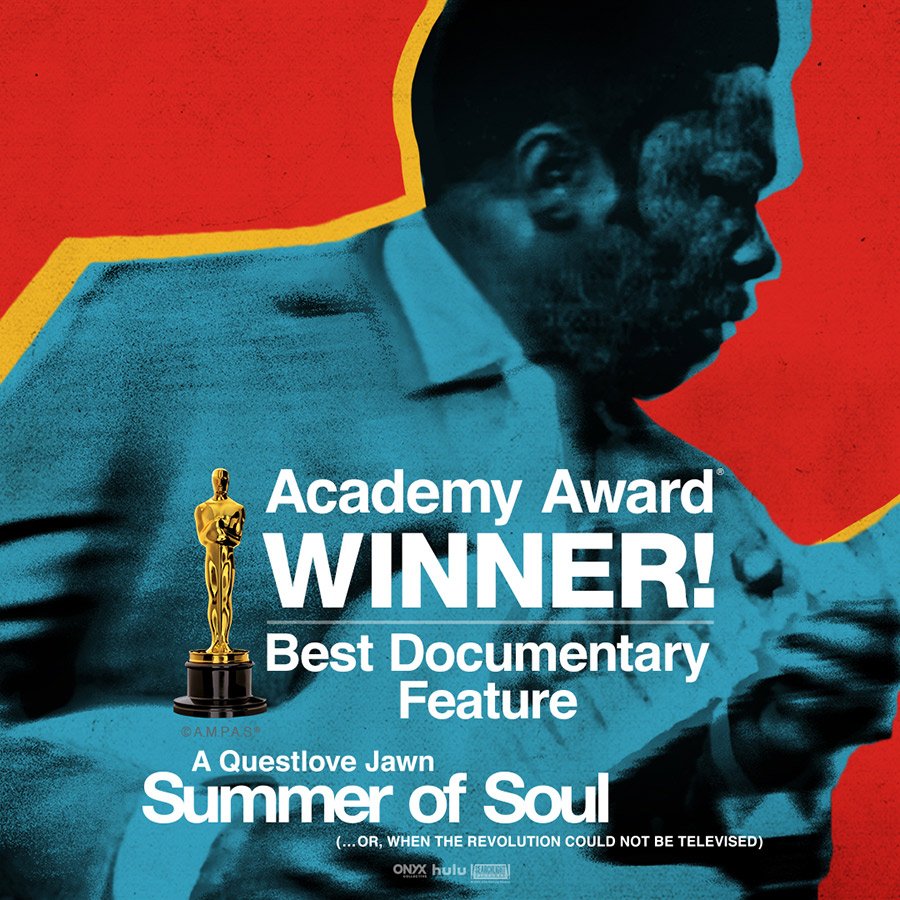