RENEE BAKER is founding music director and conductor of the internationally acclaimed CHICAGO ORCHESTRA PROJECT CMOP), a polystylistic organization that grew from the plums of classical music as well as jazz. A member of the world-renowned collective Association for the Advancement of Creative Musicians (AACM), there are few barriers to the creative turns of this composer, conductor, artist, and instrumentalist. As a featured ensemble, CMOP has been chosen to work with NewMusicUSA and the EarShot program of the American Composers Orchestra. Called the latest AACM visionary by DownBeat Magazine, Baker is one of the brightest and most fertile minds in active in composition today.

She has composed over 2,000 works for ensembles ranging from pieces for instrumental solos, ballet and opera to large orchestral works that bridge the classical, jazz and creative music genres. Her ability to embrace various creative parameters in her work has led to commissions for the Chicago Sinfonietta, Berlin International Brass, PEK’ Contemporary Project, and DanceWright Project, among others. As an author/composer, she has self-published 5 graphic score novels and is currently scoring the silent Japanese film A Page of Madness.

As a disruptive force in composition, she has create a gestured conducting language she calls CCL/FLOW (Cipher Conduit Linguistics), which she has employed when working with numerous cutting-edge groups in Cologne, Berlin, Netherlands, London, Chicago, Portland (OR), and other international ensembles. Another aspect of her composition skills is the development of her painted score exploratorium pieces for ensembles of variable sizes. Baker is also in demand as a lecturer and expert in nontraditional composition techniques, as well as large ensemble comprovisation/ improvisation development.

Aspects of the art world permeate Baker’s work. Her performance art work, Sunyata: Towards Absolute Emptiness, premiered at the Museum of Contemporary Art (MCA) Chicago in May 2015, and her tactile score sculpture works will be featured as part of MCA Chicago’s Sunyata premiere. 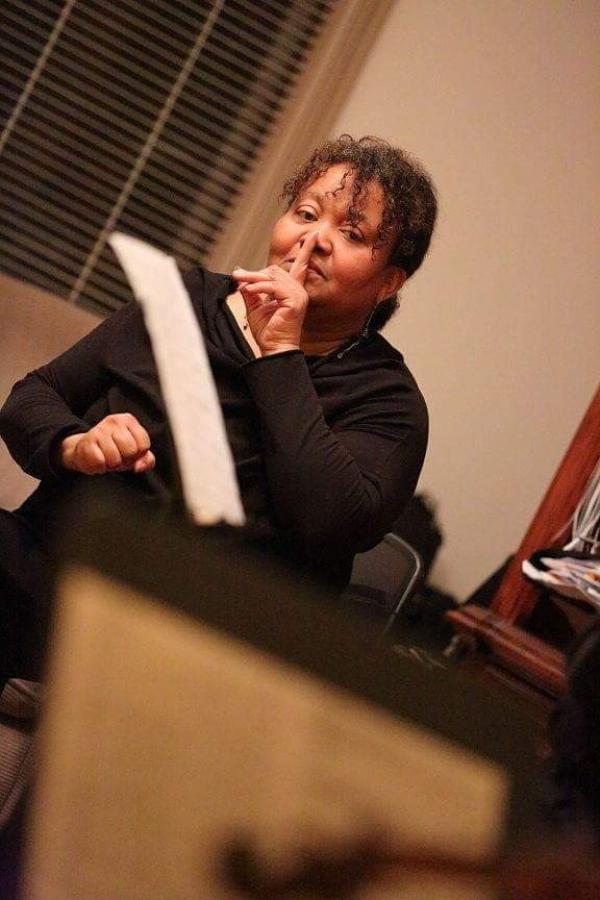