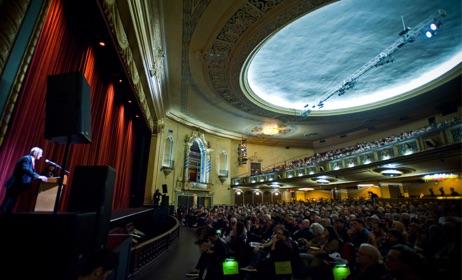 The crowd waits excitedly outside the front doors of the Virginia Theatre on April 18th, the opening night of Ebertfest. They begin to gradually file in the theatre as the smell of fresh popping movie theatre popcorn fills the lobby along with the sound of the organ already playing onstage. Guests talk about their favorite scenes from The Fugitive which many have already seen multiple times and how thrilled they are to see the director Andrew Davis after the film.

Almost every seat seemed to be taken when I finally walked in to sit down. After a few minutes of admiring the inside of the restored 1920’s theatre when Chaz Ebert walks on stage with a roar of applause.  “This is such a beautiful sight to see all of you here at our 20th annual Ebertfest,” Chaz begins. Accompanying her on stage was the University of Illinois President, Tim Killeen, who reflects on how important the University of Illinois is to Roger and Chaz Ebert. “Whether you came from across town or across the world… may the force of Roger’s legacy be with us all,” said Killeen. ​

The movie begins, but the crowd's enthusiasm only grows. Everyone applauds when Harrison Ford’s and Davis’ name appear on screen in the opening credit scenes. The intensity of the scene where the train collides with the prisoner transport vehicle leaves the audience in silence until again, they erupt in applause at the conclusion of the scene. Many of the action-packed scenes keep me leaning forward on the edge of my seat for the duration of the film. The emotional attachment to the characters, keeping me engaged the entire time.

After the conclusion of the film, Andrew Davis walks out to discuss the filming of a movie that made 368,875,760 dollars worldwide. Interestingly enough, he revealed that the original plot for the film was going to be a surgery performed by Ford’s character, Richard Kimble, gone wrong that results in a revenge-murder plot. Instead, Davis called his sister who is a nurse and she gave him the idea of a manipulated drug protocol. Davis reflected on how the film came together and revealed other interesting facts as well. Many audience members were shocked to find out that Ford limps for most of the movie because he had injured his knee while filming one of the first scenes of the film. “He was actually on a lot of painkillers throughout the movie,” said Davis.

As the crowd begins to file out of the theatre after the question and answer discussion, guests were once again talking about their favorite scenes and facts that Davis revealed. The opening night of the 20th annual Ebertfest, wrapping up successfully.