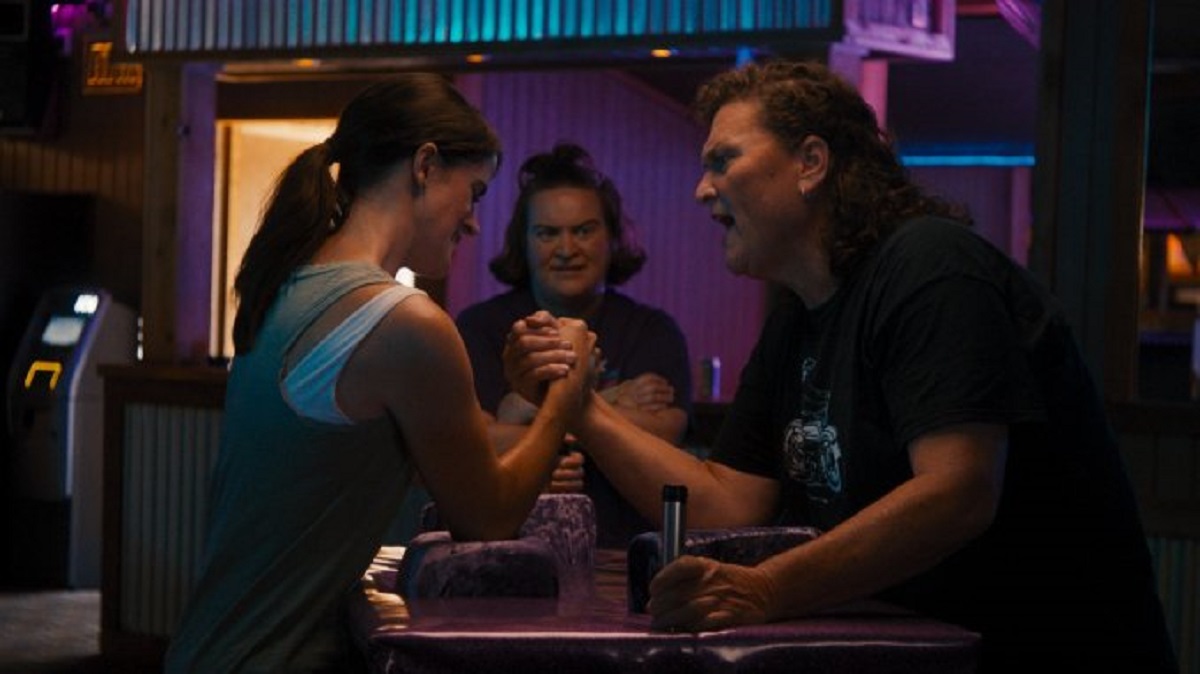 ‘Golden Arm’ Review: Mary Holland Kicks Butt in a Funny, Feminist Reimagining of ‘Over the Top’ by Kate Erbland

Whether you love the Sylvester Stallone-starring arm-wrestling comedy “Over the Top” or think, “eh, maybe I don’t need a Sylvester Stallone-starring arm wrestling comedy in my life,” there’s a new option that will be more appealing: Maureen Bharoocha’s “Golden Arm,” which reinvents the sports movie with such pluck that it should please every stripe of arm wrestling comedy fan. Aided by a go-for-broke performance by star Mary Holland — consistently the best thing in many projects, and here finally getting the lead role she deserves — “Golden Arm” might be destined for the same sort of cult status as Sly’s version, and that’s just fine for this charming indie comedy.

Written by screenwriting duo Ann Marie Allison and Jenna Milly, who make their feature debut with the film, “Golden Arm” ably contorts the usual sports film tropes — an unlikely contender, a big final match, plenty of personal demons — into a new take on the genre. Much like dearly departed Netflix series “GLOW,” “Golden Arm” builds a distinct and interesting world for its ladies to wrestle within, never making fun of a setup that seems like an easy target.

The recent Malin Akerman-starring “comedy” (a very loose, very generous genre designation) “Chick Fight” attempted to mine similar material, with dismal results; Bharoocha’s film offers the sort of textured reality and wily spirit that film was unable to tap. “Golden Arm” takes its characters and story seriously, but that never detracts from how fun the whole thing is.

Brash trucker Danny (Betsy Sodaro, making a meal out of a usual BFF role) has fun on the road participating in arm wrestling competitions, but when an injury at the hands of the mean-spirited Brenda the Bone-Crusher (Olivia Stambouliah) takes her out of contention for an upcoming tournament, she lands on a rage-fueled comeback idea: get a ringer to take Brenda out. Danny happens to know just the gal: her best friend Melanie (Mary Holland, who recently co-wrote and co-starred in the holiday charmer “Happiest Season”), who has a so-called “golden arm” that she’s been wasting on a humdrum life.

Melanie might not be ready for greatness, but her world is very much in need of a major change. She’s minutes from signing divorce papers, her adorable bakery can’t seem to snag quality customers, and she just doesn’t feel like herself anymore. Allison and Milly waste little time: Danny’s plan and Melanie’s personal problems are unspooled within the first 15 minutes of the film, all the better to get us on the road for spirited sports high jinks.

Amusing diversions, like flashbacks to the gals’ college experience or Danny listing her favorite ways to get into a bar fight, add humor and texture to the first act, along with at least one amusing singalong to Heart’s “These Dreams” (it’s the girls’ favorite song, but they’re not so sure about the lyrics). Bharoocha, Allison, and Milly know these characters, and rising comedy star Holland and the very funny Sodaro approach them with love and respect. That’s the key to making this seemingly silly film shine, by finding space for real, lovable people in a wacky world, full of dirty dive bars and a scrappy final tournament.

Despite Melanie’s skill, she’s not the most obvious choice for badass pro arm wrestler. She’s a little prissy (her first bar match is almost derailed by her desire to find a hook to hold her purse), and her inner demons are aces at keeping her from tapping into her rage and competitive spirit. She can’t even settle on a good in-ring character; she accidentally becomes known as “Freaked Out” after a case of pre-competition nerves almost takes her out, a moniker that sticks with her until she’s finally ready for something more badass. Melanie is both our heroine and the entry point into this wacky world, and Holland infuses her with the perfect mix of heart and humanity to make that all work.

Bharoocha kits out her film with a colorful cast of supporting characters, bringing life to the insular world at its heart, including Dot-Marie Jones as Melanie’s eventual trainer, Aparna Nancherla as a smarty-pants competitor, Ahmed Bharoocha as Danny’s faithful “sidekick assistant,” and Eugene Codero as a potential love interest for Melanie. While its energy starts to flail by the end of its second act, “Golden Arm” is able to end strong, using the grammar of sports films and the amusement of arm wrestling to deliver a satisfying win worth cheering for. 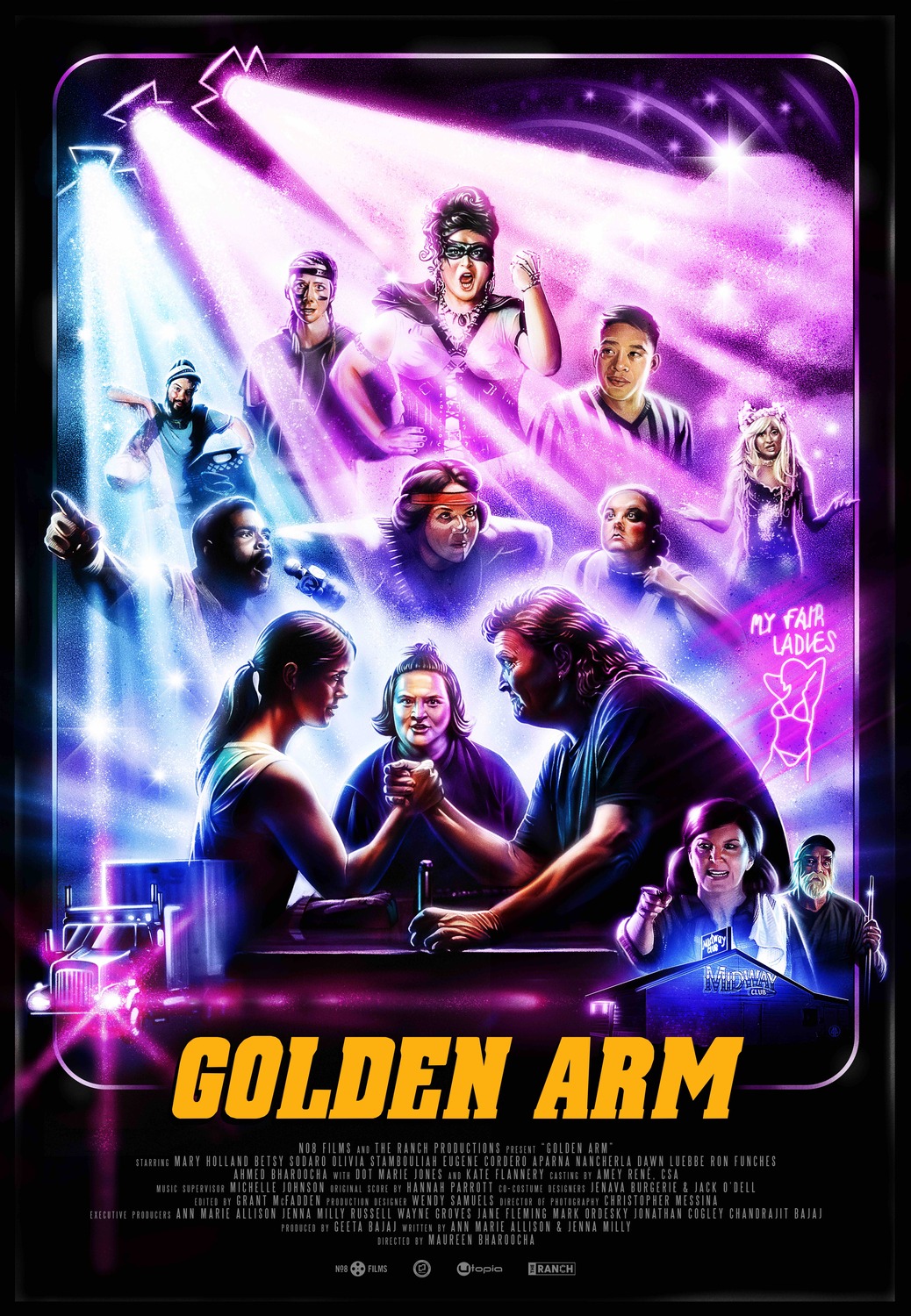